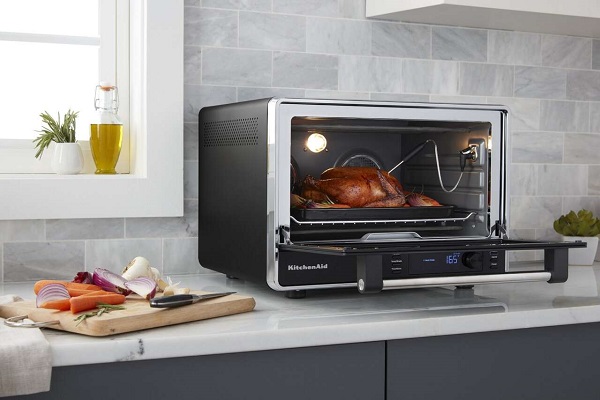 Are you looking for a new oven for your kitchen?

You have probably come across a convection oven; however, how are these ovens different from the conventional types you are likely used to?

Though both of the models look the same on the exterior, it is quite easy to see the dissimilarity between the two when looking inside.

Convention ovens feature an exhaust system and a fan. They also have a third heating element for helping you get good results from the food you are cooking.

What Is A Convection Oven?

This appliance features an exhaust system and fan that helps circulate hot air around your oven’s cavity.

Doing this will minimize cool and hot spots and help meals on each rack cook more evenly.

Additionally, these ovens come with a third heating element, referred to as true convection, to help dishes cook quicker.

Another benefit to convection models, the exhaust system and fan will help minimize the amount of moisture in your oven.

This will help dishes brown and crisp on the exterior and remain juicy on the inside.

Many convection types of fans feature a convection setting. It will help activate the third heating element, exhaust system, and fan.

You can turn on or off the convention oven, permitting the best versatility.

When you turn on the convection setting, you are making the most of your appliance’s advantages.

When the setting is off, the oven will operate like a thermal, conventional oven.

Using A Convection Oven To Cook

Two things to keep in mind include:

Your food’s interior cannot feel this wind, though the oven’s radiant heat will simultaneously be cooking your food items in the normal manner (i.e. from the outer in).

This means that convection ovens are superb when you want to roast cuts of meat where you want them to be medium-rare on the interior but properly browned on the inside.

It will mean beef roasts generally, particularly leg of lamb, as well as prime rib, and pork that you should cook medium instead of medium-rare.

Easy Steps For Baking, Roasting, And Cooking With The Convection Oven Include:

Step One: Converting Recipes For Your Oven

If you are using a convection oven for cooking, look at the recipe to see if you should adjust the temperature/time.

While many recipes are written for these appliances, some recipes offer recommended temperatures and times for convection baking and cooking.

A helpful tip for fan convection is to subtract 25°F from the listed temperature.

To get true convection, you should multiply by 0.75.2.

For instance, if your brownie recipe needs 35 minutes, you should adjust to 25 minutes.

Ensure that you look at the manual for precise instructions about adjustment of temperature and time.

Ovens will vary, so you should monitor what is cooking.

It would help if you preheated the oven to the temperature you’ve adjusted.

You can set the timer for the time adjusted and put the food items on the oven racks for even cooking and constant heat.

You can use the convection roast for crispy, brown outside layer on the meat.

Importance Of Using The Convection Setting

Since food items cook quicker in this appliance, and usually at a lower temperature, it saves energy a little more than a standard oven.

Standard ovens may have hot spots, based on the position of the heating element.

However, the fan in a convection model can circulate the air to balance the temperature difference.

Since hot air is blowing directly onto your meals rather than only surrounding it, meals cook roughly quicker in this appliance.

The air in a standard oven may get a little damp since moisture cannot escape.

Convection will create a dry surrounding that will caramelize the sugars quicker when roasting.

For this reason, food items such as veggies and meats become browner, but the inside remains humid.

When You Should Use The Settings Of A Convection Oven

For that reason, convection is more efficient than standard.

This will help in creating more lift in pastries such as croissant and pie doughs.

Whenever You Are Cooking Food That Is Cooked Using A Cover

For this reason, you may as well use convection as it will cook quickly.

You will not need to rotate them halfway through baking.

Convection ovens cook more evenly and faster, and the drier surrounding will caramelize other parts and perfectly produce a crispy skin.

Many of these models can come with the fan back-mounted fan so that the air will blow forward.

But actually, the air swirls in all directions. To make the most of the effect, you should use pans with low sides.

Additionally, you should never cover the food (depending on your recipe, of course).

The manual can provide you with instructions about positioning the shelves for the best air circulation.

Meals that do not do very well in a convection oven are quick bread and cakes.

Since convection ovens generate quite even heat, they get rid of “hot spot” in these appliances.