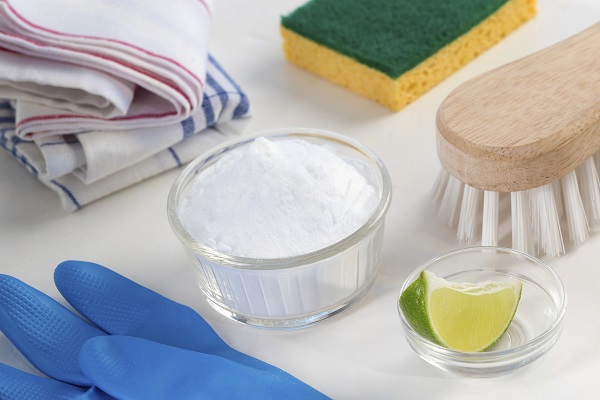 Cooking will cause sharp smells to get dispersed throughout your home. Heating food will create smells, some of which may be nasty.

One way of limiting unwanted smells is by responding fast as the odor may get worse with time.

The right use of smell-cleaning chemicals, the best ventilation, and cautious clean up can help in controlling the smells emitted in your kitchen.

Have odors that regardless of what you do, you simply cannot remove?

These simple hacks can help in getting rid of smalls in the kitchen, sink, disposal, refrigerator, garbage, and more.

Cleaning Up As You Go

It might be tempting to dump all cutting boards, pans, bowls and more in the sink while you cook with the “ I will deal with that afterward” mentality; however, an efficient way of removing specific odors (such as grease, garlic, and onion) is cleaning as you go.

Rather than allowing these odors to seep and become stronger, you should thoroughly wash the cooking tools and utensils as soon as you can.

In there is an exhaust fan in your kitchen, remember to use it whenever you are cooking to ensure your house smells clean and fresh.

A range hood’s fan helps in pulling stinking air out of your kitchen and will help stop cooking smells from seep into space. It is best to turn the fan on whenever you are using the cooktop or oven.

If your kitchen does not have an exhaust fan, think about how you can install one to provide yourself with a helper to fight against smells in the kitchen.

Clean Up the Floors, Cabinets, And Counters Of Residue

You should create a plan for wiping down surfaces while cooking and deep clean every week. Grease areas can attract more food, which causes more kitchen smells if left for long periods.

Get An Air Purifier

Besides getting rid of allergens from the air in your house, the best air purifier can help in minimizing smells in the kitchen as well.

This device functions to reduce pollutants in the air to ensure that fewer odors linger.

In addition to clearing cooking odors, the system will also minimize odors from mold, pets, smoke, and other sources of nasty smells.

This is a simple method to take into consideration while you are cooking. A good way of preventing lingering smells is trying and preventing them from stagnating in your kitchen.

It is good to open windows, particularly if you can use a fan. Make sure you keep the airing filters clean or else the grease will build up, making the smells worse.

Preventing The Build-Up Of Oil On Appliances

Bacon grease might be filled with aroma; however, it is also thick with powerful smells that are difficult to get rid of.

When grease and oils from food build up on the appliances, it will cause smells to linger long after you have switched off the electric range or gas.

To clear cooking odors, you will need to stop the build up of oil in the kitchen.

You can use powerful cleaning products with a fresh fragrance to permeate the oil on the microwave, oven, stove, and any appliances or countertops situated close to the cooking space.

A damp sponge will stink badly. You can prevent the build up of stinking bacteria by squeezing out sponges after each use.

After that, then keep them on a surface that gets the best air circulation.

Prolong a soiled sponge’s life by soaking it in the dishwasher to remove that nasty sponge odor.

Cuttings boards are prone to stinky smells. Small scratches turn into breeding grounds for microorganisms once the juices from veggies and meats permeate.

Even if you throw them in the dishwasher or scrub them in your sink frequently, there can be bits of germs that are being left behind.

Ultimately, the board starts producing a smell gets transferred to your food, utensils, and hands.

Get Fast On Clean Up

This may look like a quite obvious option to eliminate lingering odors, but it can usually appear the hardest.

What is important is to soak some utensils. Chopping boards, particularly, are very essential.

Wooden board ones particularly often absorb cooking odors so try and soak them right away overnight.

After that, allow them to dry naturally the following day, to wash the smells away.

Installing A Vent In The Ceiling, Above The Stove

Not only do aeration systems get rid of nasty smells, but they also help in improving your kitchen’s air quality.

Unless you are an expert with house building, you should get advice and consultation from an expert venting firm.

If you cannot afford to install a fan or range hood above the range, you should open the windows.

Though this is not possible in all areas, cooking with your windows open can get rid of nasty smells and let them drift outdoors, instead of through your home.

Cleaning Recycling Bin And Trash Can

You should wipe the interior of the recycling bin and trash can each time you remove the garbage, with a smell-removal spray.

Ensuring the cans stay clean can help in getting rid of nasty smells before they make your entire kitchen smell bad.

Putting Baking Soda In Your Refrigerator

A refrigerator harbors a lot of nasty odors, even if you are diligent about getting rid of leftover meals before it goes bad and cleaning up spills.

You can put a bowl of baking soda in the back corner of your refrigerator to help in neutralizing toxic smells.

And while you are in there, clean upside doors to wipe up drips or crumbs, or crevices and cracks in crispers or shelves that may be causing the nasty odor.

Besides being the best insect bite reliever, skin exfoliant, and even cleaning agent, baking soda will work wonders for getting rid of the smell.

With food smells, you can sometimes you can use powerful and more pleasing aromas to fight them. Next time you use lemon or an orange, make sure you keep the peel.

After that, when you want to clean up the kitchen away from cooking smells, just simmer the peels on your stove for one hour.

By doing this, it will provide a fresher, gentler aroma and remove the smells you do not want.