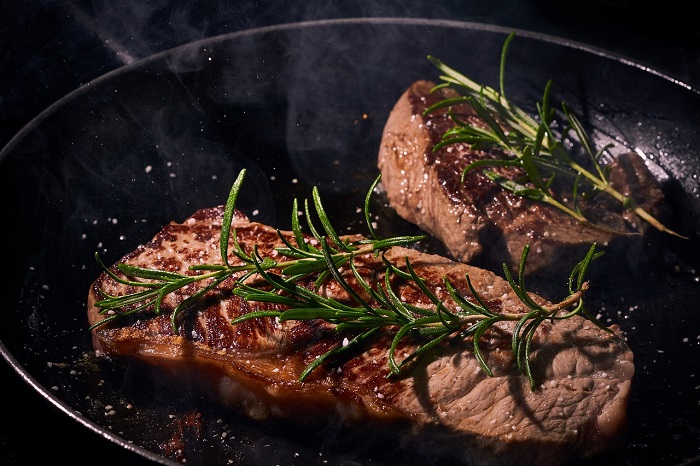 Butter is famous for its richness in taste and flavour. Butter contains 80% fat content, 18% moisture and 2% fat solid.

It is a popular ingredient for most kitchen recipes. As a dominant ingredient, can you use butter on cast iron skillet? Yes, you can!

But like other sensitive foods and ingredients, you ought to use it appropriately.

Moreover, a combination of butter and egg yolk creates the Hollandaise and Béarnaise              sauce.

Adding melted butter coats, the starch in potatoes prevents starch and water reaction.              The result is soft and smooth potatoes.

Butter is also used as a substitute for oil in preparing a number of foods in the kitchen.             Actually, it is suitable for the preparation of the majority of kitchen recipes.

Butter Is Applicable In Various Forms

For light pastries and cookies use cold, solid butter when making the dough. You can use a food processor mix the ingredients or even great the butter cubes to maintain the cold temperature of the butter.

The butter melts during the cooking process creating small air holes. Pastry and biscuits depend on distinct pieces of cold, solid butter distributed throughout the

To get your soft butter, place the required amount of butter on the kitchen counter at ordinary room temperature for an hour or two.

When you gently apply pressure on the butter, and it gives away with no effort, then its temperature is accurate.

If it feels softer more like a liquid form, return it to the refrigerator for half an hour.

To melt butter, heat the cast iron skillet on low heat then add your butter. Rotate the pan slowly so that the butter can cover the skillet’s surface.

You can also warm it in a microwave. Place the butter in a container without covering its top and heat it for 20-40 seconds.

This acts as ordinary oil in the preparation of food. Do not heat butter in high heat as it will burn, changing its color and altering its taste.

Minimizing foam when cooking butter is a sign that the melted butter is ready for cooking. At this point all the moisture present in the butter has evaporated, meaning cooking with the butter can have the temperature increase above the boiling point of water.

When foaming minimizes, the butter will continue to heat and smokes at 2500- 3000.

It is crystal clear that we all love our cast iron cookware. The cast iron skillets are versatile and can prepare a variety of kitchen recipes.

Most people use their cast iron for literally almost every dish they cook. Is it that the cast iron makes food tastier?

Many culinary experts argue that food made on cast iron has a better taste, especially due to the browning and crispy effect on the outer layer of food. Cast iron indeed enhances the taste of majority foods.

It is, however worth noting that some foods like acidic foods adapt the taste of iron due to the leaching of iron from the cast iron.

This taste is unpleasant, and hence you should avoid such foods on your cast iron.

This is the time to explore with your cast iron cookware! Try out various recipes and excite your taste buds. Below are some foods with improved taste brought by the cast iron.

Cast iron muffin pans are useful equipment in making a variety of breakfast recipes like simpler versions of quiches. Brush the inside of the cups with butter or oil.

Add some chopped veggies, meat or cheese and top up with a mixture of eggs with milk or cream till 3/4 full.

Smaller amounts of this mixture bake faster, be sure to keep watch of it. Your tasty egg cups will be ready, half an hour less than a standard quiche.

Cooking mac-and-cheese recipes on the stovetops makes it creamy while baking in the oven gives it a crunchy topping.

Cast iron can achieve both results at the same time. The roux in the cast iron and scrapping the tasty pieces on the pan’s surface makes your cheese sauce a bit darker than usual.

Baking mac and cheese take little time to be keen so to prevent it from burning and drying up.

Brussels sprouts, corn and spinach cook perfectly in a cast iron skillet on a stovetop. Adding roasted garlic and heavy cream or ground nutmeg makes a good & different side dish for special events.

Simmering and billing of the cream in the cast iron give it a richer and more delicious flavor. Using a cast iron skillet, you will have to keep on lowering the burner than expected to maintain a simmer.

A cast iron skillet not only makes cornbread but also quick bread such as zucchini. The shape of the skillet allows you to make different shapes when cutting the bread slices.

Apply oil on the skillet, minimize the temperature by 250 and keep a close watch on the bread. It takes about 20 minutes to bake, as it becomes thin when spread on the skillet.

A cast iron skillet is the best cookware for warm cookies, topped with melted chocolate just out of the oven. A 12-inch skillet is adequate to fit most cookie recipes.

Coat the cast iron skillet with oil and bake at 375° for about 15-20 minutes. When your dessert is ready, slice it into wedge shapes and can serve with ice cream.

Making your Oven S’mores indoors makes the summer dish enjoyable throughout all the seasons of the year.

A cast iron skillet maintains the warm temperature of your S’ mores long after it is out of the oven. Coat the skillet with butter, add some chocolate chips and cover it with marshmallows.

Bake the ingredients at 425° until the chocolate begins to melt, and the marshmallows turn brown. Serve it with graham crackers.