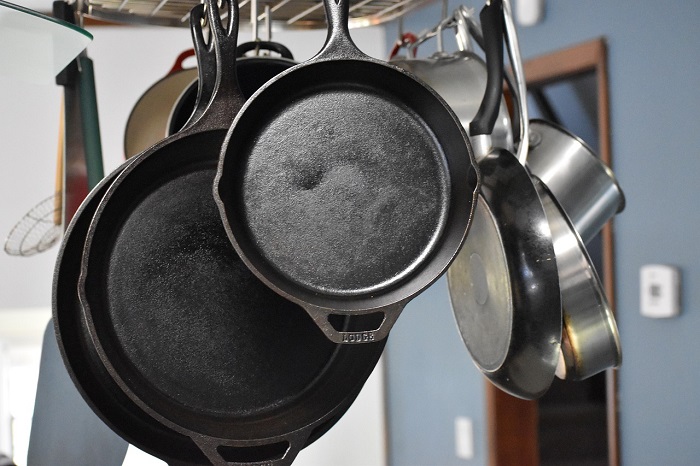 Cast iron is reliable cooking equipment that has been in use for over 2500 years. With the many years, it has been in use; there is minimal evidence of its health risks and dangers.

Recently some people have questioned the safety of cast iron and this initiated research on the same. Is cast iron perfect for you? The answer is still debatable to many.

Some believe that iron ions from the cast iron are beneficial to the body healthwise as iron is essential in the body. Others argue that iron from cast iron is higher than the body’s Recommended Dietary Allowances (RDA) hence could be harmful to your health.

This article discusses the existing evidence that proofs the health risks involved with cast iron and also health benefits from cast iron.

Based on the information provided, you can make your own conclusions if cast iron is suitable for you.

What Is Cast Iron Made Of?

Iron in The Body

Apart from manufacturing of cast iron cookware, iron is also needed as a mineral by the body. You get it through your dietary intake as the body cannot make the iron itself.

Iron is essential in transportation of oxygen by the blood throughout the body, enzymatic reactions and a component of the immune system.

Foods with high amounts of iron per serving;

Are You Taking In Too Much Iron?

You can easily get iron from a balanced diet. If you fall under this category, you should minimize your iron intake as it may be harmful to your health.

How Much Iron Is Necessary?

Research shows that the required limit of iron intake is 40mg from meals and supplements. This is in connection with gastrointestinal effects following supplementary iron intake.

It is worth noting that adults with normal iron intestinal functions have a lower risk of iron overload from dietary intake.

It is risky to consume excessive iron from either supplements or diet. If you consume a lot of iron from your meals, avoid additional iron from the cast iron skillets.

To control the iron build up, you can minimize on iron-rich foods such as red meat and also include iron absorption inhibitors like coffee in your diet.

Use of Cast Iron Due To Iron Deficiency in the Body

Insufficient irons cause anaemia alongside other related health problems.

It is therefore advisable to use cast iron for those who are at risk or suffer from iron deficiency to increase the iron content in their body.

The vulnerable groups who are at risk of developing iron deficiency issues.

Season Your Skillet to Balance the Iron Intake

Seasoning helps if you want to continue using your cast iron skillet at the same time minimize the amount of iron leaching from the pans.

This separates your meal from the bare metal. The coating creates a non-stick surface and adds a protective layer against leaching of the ions into the food.

How Iron Affects Your Food Intake

Additionally, cooking tomato sauce in a cast iron skillet gives 5mg of iron which is over 60%, of the RDA.

This is due to the fact that acidic foods have high moisture content. Foods that cooked for long leach more iron content than those that cook faster.

The Benefits of Cast Iron

The Disadvantages of Cast Iron

Leaching of iron in the food can pose as a health hazard for groups, particularly those that have high iron content or intake in their body, as mentioned above.

To minimize leaching, you can season your pan as stated above. Moreover, avoid acidic foods on cast iron skillets and also do not stir skillets using metal utensils to avoid scratching.

You can as well opt to minimize on iron-rich diets such as red meat and if you are on any iron supplements stop taking them or take one with a lower iron dose.

It is clear that cast iron has nutritional benefits for those trying to achieve their iron RDA as well as can harm those who have high iron intake.

The effects are however vague and unclear for the many years this metal has been in use.

For those who are finding it hard to achieve their daily iron RDA from diet only can supplement their iron intake from cast iron skillet.

At the end of the day, the decision solely lies with you. It is your personal choice whether you would still want to cook with cast iron skillets or not.

This information hopefully helps you make a decision with your best interest at heart and for your family.

Do not substitute the information from the article as professional medical advice.

If you have a problem with regards to your body iron content, engage with your doctor or a medical professional for assistance.

You can enquire if the use of cast iron skillet will be beneficial to your health.