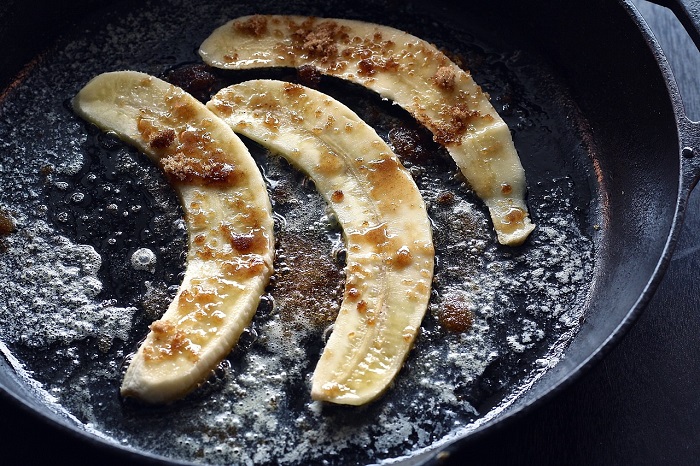 You purchased a new cast iron skillet and are excited to use it. However, when you wipe its base, you realize an accumulation of black residue on your piece of cloth.

It may also be from a skillet that you have been using for some time. The residue is normally a result of an unseasoned skillet.

It may not be harmful but can interfere with the taste of your meal.

Causes of the Black Residue

Other than the skillet’s age and how you use it, below are other factors that may cause the black residue.

It is key that you eliminate the black residue before coming into contact with your food or clothes, as removing it from either can be a difficult task.

There are various methods of removing the black residue, such as boiling water, scrubbing using chainmail, and others. This article features the 3 most common cleaning methods.

The use of salt in cleaning skillets is probably the most common method. Salt is a great abrasive, affordable, and accessible.

It is favorable when you want to protect the polymerized layer; that is the seasoning.

The combination of salt and soap removes the oily black residue.

Afterward, season the skillet with some elbow grease.

The process takes place under high temperatures (around 8800F). This temperature turns food, and oil remains into ash.

Self-cleaning ovens can get really hot, with this;

The acidic nature of vinegar clears all the oil from the surface of the skillet. This is the reason why you ought not to cook with it immediately after seasoning.

If It Has ALot Of Black Residue:

Dip the skillet in a blend of water and vinegar, if you have a big sink to fit your skillet. Soak the skillet for about an hour.

Repeat the process until there is no black residue. You can, after that, rinse and dry with a towel.

Do not leave the skillet in the vinegar overnight as it may cause pitting. This occurs when the vinegar eats away the cast iron hence damaging it.

Removing the black residue requires seasoning the skillet after, as it loses its polymerized oil layer during the process.

Preventing a Seasoned Skillet from Getting A Black Residue

Season Each Time after Use

Seasoning the skillet once is inadequate to ensure it remains non-sticky.

It needs regular maintenance, or you will spend more time seasoning rather than cooking with it due to black residue build-up.

Otherwise, you will spend more time reasoning it rather than cooking with it.

How you store your skillet is very vital. The cast iron skillet should be completely dry before storage.

As mentioned before, it is prone to rust, so it is key that you ought to wipe off all the water traces.

Do not be scared of damaging your Skillet. Skillets are among the most durable home utensils. When scrubbing, if need be, scrub it till you get to the metal till there is no more residue.

Seasoning, it will return it to its normal appearance. Furthermore, skillets can endure the cooking of acidic foods.

You can repair a damaged skillet and remove rust using steel wool. The most important thing is the regular maintenance of your skillet.