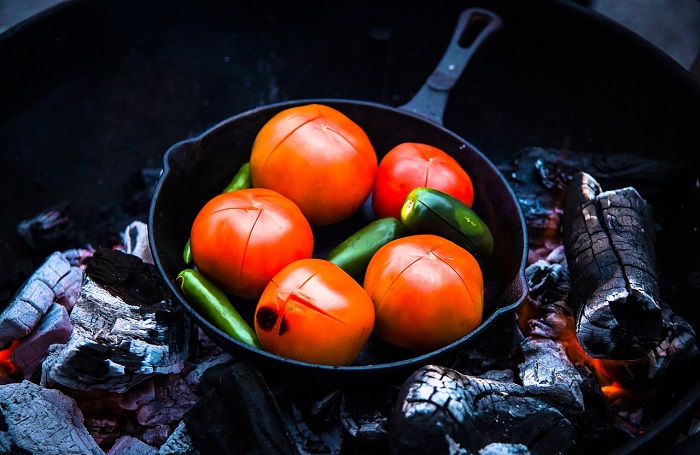 One of the most well-known kitchen equipment is the cast iron skillet. Almost every household has this item in the kitchen.

Cast iron skillets contribute to a kitchen’s aesthetics and are also useful in cooking nearly all kinds of foods. Nonetheless, the cooking apparatus has to receive enough care to last for decades.

Often, people contribute to the wear and tear of their skillets, even without knowing. Thus, it is crucial to identify some of the things to avoid when using a cast-iron skillet.

Leaving It in Water for an Extended Period

Remember, your cast iron skillet is metal in nature and can rust when in contact with moisture. Additionally, a hot iron is more vulnerable to rust compared to cold iron.

Therefore it is not good to let your cast iron skillet stay in water for an extended period. So, after use, clean and dry it immediately to avoid the formation of rust.

Cleaning It Using a Dishwasher

One thing you should not do is leave your cast iron skillet in the dishwasher. You may have good intentions, but it can damage your dishwasher.

Afterward, dry it thoroughly and store it accordingly. Taking cleaning shortcuts with your cast iron skillet only shortens its lifespan.

Ensure you wait for the pan to become warm before washing. But avoid using soap during the cleaning process.

You can use soap only when the skillet is new. Before use, clean the skillet with hot soapy water to remove any debris.

However, after its first use, all you need to do is wash it with warm salty water and a soft brush. Suppose food particles get stuck on the iron skillet, place it over low heat, and get rid of the leftovers.

When cleaning your cast iron, avoid using harsh scrubbing equipment. Instead, use salt to scarp off debris from the pan.

Substances like bulky steel wool are detrimental to a cast-iron skillet. Also, scrub it using a soft brush or paper towel. Allow the salt to cool before, throwing it in your garbage bin.

Get Rid Of All Stubborn Foods

After using a cast iron skillet, make sure no particles remain on the surface. Nonetheless, avoid using heavy-duty steel wool to get rid of them.

Even so, it would help if you never left stubborn food particles on the pan. Some particles are stubborn and need a brush specially designed for cast irons.

If your cast iron skillet remains with food particles on the surface, it is performance gets reduced.

After washing and drying the skillet, it is good to apply a thin layer of oil on the skillet and place it over low heat.

This way, the cast iron skillet becomes dry and prevents the formation of rust. But wipe the oil using paper towels to create a shiny appearance.

You can conduct this procedure multiple times, depending on the condition of your cast iron skillet.

Storing the Pan in Damp Areas

It would help if you never stored your cast iron skillet while it’s still wet. Even the tiniest amounts of moisture can cause rust.

Additionally, avoid storing the cast iron skillet in wet kitchen areas or alongside wet kitchen equipment. Ensure you use it from time to time and dry it entirely before storage.

Every time you use the cast iron, ensure you preheat it. Doing this ensures that heat is evenly distributed throughout the whole pan.

As a result, you will avoid cold spots and hot spots; thus, your food will cook evenly. Preheating your cast iron skillet in the oven is best before placing it on the cooker.

Remember, heat in the oven gets apportioned more uniformly compared to a cooker. Set an oven temperature of approximately 400 -450 degrees and preheat your cast iron.

Once the pan gets hot, please remove it from the oven and place it on the cooker to continue cooking. Your food will cook much better and will turn out to be much tastier.

Seafood tends to have stronger smells and tastes. Thus, cast iron skillets are not the best option for cooking kinds of seafood.

Unless you have only one skillet specially designed for seafood, the cast iron will absorb the seafood taste and interfere with the taste of other foods.

Preparing Acidic Foods with It for a Longer Time

Cooking acidic foods on your cast iron skillet can erode the metal. But this only happens when you leave them for a longer time.

So, when preparing acidic foods in a cast iron, please don’t leave them for more than half an hour. For instance, spices in the pan should not stay for long.

They cause metal erosion and can affect the taste of foods.

Homeowners ought to season their skillets from time to time. This process is not a one-time process.

If you want a long-lasting cast-iron skillet, you should conduct this process more often. Over time, you might see food particles getting stuck on your cast iron skillet.

Season your cast iron to solve this problem. The seasoning process entails placing multiple layers of oil on the clean skillet.

Afterward, please put it in an oven with a temperature of about 450 degrees. Leave it for one hour and switch off the oven.

Additionally, do not remove the pan before 10 -12 hours for optimal seasoning.

Storing Leftovers in It

Another practice that you should always avoid is storing food in your cast iron skillet. Instead, leave your leftovers in plastic containers.

Whenever you store food on your cast iron skillet, it absorbs moisture and can lead to rust.

Ultimately, ensure you observe all the guidelines indicated in the manual to promote a cast iron’s longevity.

Additionally, if you wish to prolong your cast iron skillet’s lifespan, seasoning is one of the best practices.