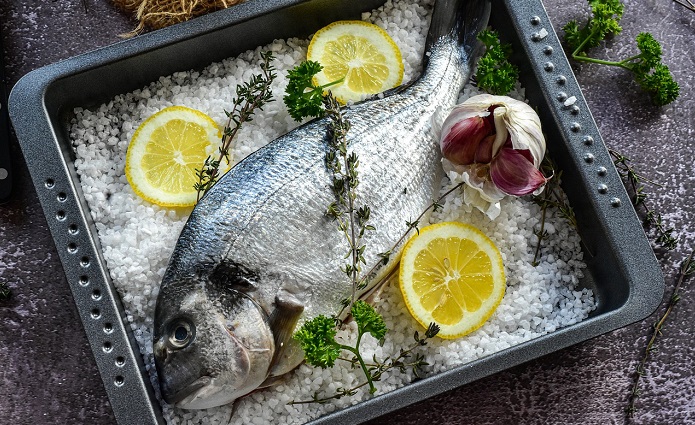 Can I Cook Fish In A Cast Iron Skillet?

Fish is a popular meal in many households because of its incredible taste and tenderness as well as health benefits.

There are various methods you can use to prepare your fish, such as frying, sauteing, baking, among others.

The most important question is, where do you cook your fish from? Is a cast iron skillet the most appropriate kitchen tool for cooking your fish?

In the culinary world, everyone has a different opinion and cooking strategy for each meal. Many people discourage the use of cast iron skillet in prepping of fish dishes.

This is because it falls under the category of delicate meat, and it easily sticks on the surface. Furthermore, fish has a strong scent that may remain on the skillet compromising the taste and flavour of adjacent meals.

However, it is possible to prepare a decent fish meal on a cast iron skillet. This article highlights the best way you can use the skillet to prepare your fish.

Why Fish Sticks On the Surface of the Cast Iron Skillet

Fish passes for a healthy meal as it is high in protein and low in fat. If you are not familiar with its cooking process, you may end up frustrated with the results.

By now, you ought to be aware that proteins stick on the surface when cooked. A good example is placing an egg on a dry cast iron skillet.

The egg sticks on the surface and will give you a hard time getting rid of the stuck pieces from the pan.

Allowing proteins to denature slowly makes them stick firmly on the surface. This means that you have to allow them to cook fast before they start sticking.

The necessities to a well cooked fish are as follows;

Browning starts at 320° F, meaning before you can add the pieces of fish ensure the surface of the skillet is hot enough.

Adding fish reduces the temperature in the pan. With this, avoid adding fish directly from the refrigerator as it will take time to resume to its initial temperature.

Instead, remove the fish from the refrigerator about half an hour before cooking.

Preheat the skillet on medium-high heat. To test if the pan is ready, pour a few drops of water, if the water boils violently and evaporates after a few seconds then you are ready to start.

Patting the fish dry is a key step before you start cooking. To explain this, in this process, you will probably use oil, butter, or any fat and water don’t mix with oil.

Be sure to drain the most moisture you can from the fish.

After that, add adequate oil to coat the surface of the skillet before you place your fish. You can instead opt to brush some oil on the fish directly.

Start With the Presentation Side

Allow the oil heat up until it shimmers in the pan before you can add the fish. If you had brushed the fish skin with oil, place fish in the pan with the skin side down.

This is a preferable method. Most chefs say that you ought to place the fish on the finished side, that is the side seen first when you put it on a plate.

This is because you will get the best grill marks at the beginning when you place the fish as the skillet is hottest at the time.

After it absorbs the heat, the temperature in the skillet cools down a bit; hence the grill marks may not be as good on the flip side.

Other chefs disagree with the first logic and advise that when preparing any type of meat, cook the skin side up.

According to them, heat from the pan pushes the inner juices away from the heat to the opposite side of the meat. Flipping the fish prevents the juices from leaking out of the meat.

To some extent, this theory sounds logical and is normally applied when cooking chicken breasts.

Check out for any differences and any leaking moisture. With the two results, figure out which is your preferred method.

Do Not Keep On Moving and Turning:

Do not keep on moving and sliding the fish. Just like any other protein, do not play with the fish, instead, place it and leave it to cook till it is time to flip.

The sure way to tell that it is time to flip it is when the skin releases from the surface and no longer sticks.

Avoid over-reliance on recipe timings as it can land you in trouble. When the fish browns, it will release from the skillet, causing less sticking if there would be any at all.

After placing your fish skin side down or as per your liking, adjust the heat till you hear a perfect sizzle to give you a perfect seared fish. If you hear loud poppings and sputtering, regulate the heat to avoid a black burnt fish.

After 3 minutes, the prescribed cooking time, attempt lifting the fish with a wide fish spatula. If it releases from the surface, flip the fish gently. If it sticks on the surface, give it a few seconds before you try again.

Do not force the flipping while scrapping with a spatula as it will ruin your meal.

Do Not Let It Overcook:

Do not let the fish overcook. After you flip, give the fish time to cook until it is opaque and firm. Don’t let it get to the point where it is flaky.

Even when searing a thicker fish in the oven, a similar process applies. With the presentation side facing the surface, place it on a hot skillet and cook until it releases from the surface.

Flip the fish and allow it to cook until it turns golden brown and is firm and opaque. Allow time for overcooking.

To avoid sticking, some people dust the surface with a light coat of seasoned flour. The flour on the fish combines with oil to form a raux.

This is an ideal way to cook fish, especially if you will be serving it with a thickened pan sauce. Nonetheless, if you follow the process above well, you will need no flour for this purpose, only if you wish to.